It’s that time of year, time for the Annual San Diego Fair, beginning June 3 through July 4. This year it is called Mad about the Fair, it’s 26 days of wild and whimsical fun! Join us for San Diego’s biggest annual event! 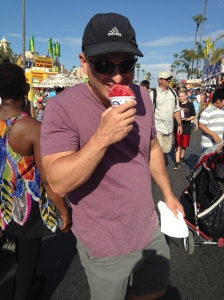 The smell of the fair is in the air with the aromas of Funnel Cakes, Fried Twinkies & Baaaaaaaaaaaaacon!  For all you chocolate lovers- you can have chocolate covered anything, including Bacon!  This year dig your teeth into Chicken Charlies Krispy Kreme Triple Cheeseburger. That is three burger patties with cheese sandwiched between 2 donuts – are you kidding me? Wow, if anyone has tried it please let me know.  Eat at your own risk & bring some Tums just in case.

50 Shades of Rides –buckle up and enjoy the rides.  From flips, twirls, dips & wheels,  my favorite is the Grand Wheel and an added bonus it has grand beach views.  Fun it up- from the coaster to ferris wheel you can be a kid again.  It’s fun for all ages.

50 Shades of Concerts– turn it up, it’s a great entertainment line-up this year.  From Country to Rock   Toyota Summer Concert Series on the Heineken Grandstand Stage

Do you have the fever for the flavor of the fair, if so now is the time to go check out sights & sounds of the San Diego Fair.  It runs from June 3-July 4 closed Mondays & the first  two Tuesdays. Sundays are Family Day so grab your friends and family and we will see you out at the Fair.

Let us know your favorite part of the fair!